The philosophical gist of the proverb that ‘one cannot step into the same river twice’ does not apply to a river’s channel, especially where the encompassing age of such extensive, enduring landforms can be dated in the hundreds of millions of years. Embodied in the direct, material genealogy of its ancestry, new evidence reveals the Zambezi holds the status of Earth’s oldest river, known. Its origins can be traced back directly to an origin on the Supercontinent of Gondwana at the end of the Carboniferous Epoch; when the precursor of the African plate was centred over the South Pole. [see the two publications – appended]

This was when, through these Dwyka times (310-280 million years ago), a vast icesheet smothered Gondwana’s landsurfaces. The Proto-Zambezi formed as its headwaters grew in outflows of glacial meltwaters draining the west-flowing watershed of the TransGondwana Super-Mountains.
This end-Dwyka birthing of the Proto-Zambezi sets a minimum age of 280 million years on the overall tenure of the river. The appended papers tell the epic story of the stages and fates of the Zambezi’s growth, including a complete switch in flow direction from west to east. The primary channel lost and gained tributaries, which repeatedly reshaped its catchments. The odyssey of the Zambezi straddles the life histories and fates of two continents: first Gondwana and then Africa.
We can get one useful handle of this immense span of time from the dinosaur fauna, whose fossils testify to the geological antiquity of the channel of the Middle-Lower Zambezi. These Jurassic dinosaurs were the dominant mega-vertebrates in Gondwana times, when sauropods, an allosaur and other species left their footprints preserved in Chewore sandstones (Dande Formation). These Mesozoic vertebrates populated the valley of the river, and drank from its channel, when the Proto-Zambezi was already middle aged.
The popular article, forthcoming in African Fisherman, develops some of the implications formally presented in our scientific paper (Key at al. 2015). The implications of the status of the antiquity of the Zambezi river are nothing short of remarkable. We especially need to reconcile with the heritage status of the wildernesses, in south-central Africa, through which the Zambezi flows today. Their attributes can be traced back to Gondwana times. Collectively, the world heritage values of the Zambezi, its geomorphology, and biodiversity rank alongside other landscapes of outstanding global significance, including the North America’s Grand Canyon. 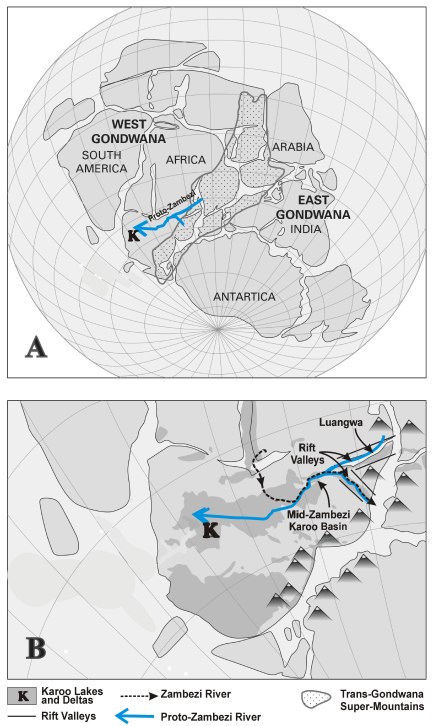 Upper Map (A) of the Gondwana Super-continent to show the Proto-Zambezi river (thick blue line) and the massive Trans-Gondwana Super-Mountains, at the time when the Indian Ocean has began to form during the breakup of Gondwana (approximately 160Ma). This west-flowing Proto-Zambezi drainage system maintained a vast inland Karoo sea. The original extent of the Karoo sediments was likely larger, before the break up and erosion associated with formation of the daughter continents of Gondwana.

Lower Map (B) details these centres of Karoo deposition (shallow lakes, seas and deltas) depicted in darker shading, as represented in surviving rock formations in southern and central Africa. The superimposed dashed line approximates the position of the modern, east-flowing Zambezi river

This entry was posted on March 26, 2016 by Administrator.