This paper in PNAS is as an interesting pioneering study in the recently recognized science of Geoecodynamics. The covering popular science article does the work deserving justice, underscoring how signatures in amphibian DNA variation explain the crustal evolution of southeast Asia : see Frog evolution tracks rise of Himalayas and rearrangement of Southeast Asia.

The phylogeographic record of each spiny frog lineage reflects persistant high fidelity of the generations of organisms to the specific montane landform. Spiny frogs (Tribe Paini) are ecological prisoners in these high altitude mountain streams (some species are confined at 4 700 m asl), and each lineage has evolved in its respective torrential stream catchment. It is these stenotopic attributes  explains why cladogenesis of these amphibians has tracked the pace and impacts of tectonics, as the drainage responded over millions of years to uplift, caused by lateral and vertical growth of the mountain belt along a converging plate margin.

Spiny frogs from the tribe Paini are a curious group characterized by spines and powerful forelimbs in males. The species Quasipaa boulengeri is from the mountains of Sichuan, China. (Yu Zeng/UC Berkeley)

The significance of these Spiny frogs to geoecodynamics lies in the windows they open out over the geological history of Southeast Asia since the mid-Cenozoic. Specifically, the molecular dates of cladogenic events can be read off the phylogenetic tree of Spiny frogs, and quantify ages of landforms of the mountainous landscape. The five clades of extant frogs  exhibit significance geographical structuring, with each confined to discrete regions (Tibetan plateau, Himalayas, Himalaya–Tibetan plateau, South China clade and Indochina). Ancestral area reconstructions anchor this wave of cladogenic events to its beginning in present-day Indo-China. The finer-scale spatial resolution obtained from phylogeographic records of individual lineages constrain the ages of ridges (persistent watersheds), and it reveals when  river incision shaped – and isolated – high altitude landforms. In summary, locked into their habitat patches, these ancient frogs have tracked the uplift, and their lineages collectively constrain the timing of geological events through the interactions of the geospace (dynamic topography) with the ecospace (aquatic habitats).

The most interesting interdisciplinary application of these details in Spiny frog evolutionary history are to independently test competing geological hypotheses. In particular, the model proposed by Tapponnier and colleagues receives the most support (see Tapponnier et al. 2001. Oblique stepwise rise and growth of the Tibet plateau. Science 294:1671–1677; Replumaz & Tapponnier. 2003. Reconstruction of the deformed collision zone Between India and Asia by backward motion of lithospheric blocks. J. Geophys. Res., 108(B6), 2285, doi:10.1029/2001JB000661).

This model proposes the Indian plate’s northward push into Asia occurred as a series of pulses of tectonic motion, expressed in a complex sequence of impacts across the margins of the Asian plate. Incrementally, the first portion pushed aside was forged into Southeast Asia, then South China was shoved eastward, and most recently Central China was driven to the northeast. The timetree depicted in Figure 2 of Yin et al. (2010) reveals the pulse of cladogenic events in Spiny frogs at the end of the Oligocene (~24 million years ago). Each cladogenic events reflects a vicariant whose ultimate cause lies in tectonic impacts modifying the surface of Asia. Collectively, the gene trees of these frogs are interpreted as geobiotic signatures shaped by how the drainage systems responded to crustal thickening (and thus uplift) with simultaneous strike-slip extrusion of major portions of Asia. This evidence from the genomic record is consistent with the records of mammalian fossils, palaeobotany, as well as the direct geological evidence in metamorphic and sedimentary data. 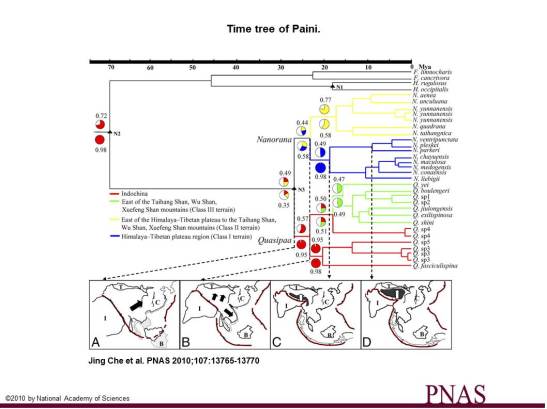 One comment on “Himalayan Spiny Frogs are Tectonic Proxies”

This entry was posted on November 28, 2015 by Administrator.