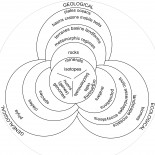 Upper panel: Error plots (median ± 0.95 HPD) depicting, for each clade, the earliest transition to each alternative habitat state defined under: a) coefficient of variation of monthly precipitation (PCV); b) precipitation during the driest quarter (PDQ); and c) substratum (bedrock geology). Lower panel: Stacked frequency histograms depicting temporal change in the numbers of branches, across all 12 clades, reconstructed as possessing each alternative habitat state.

In the context of molecularly-dated phylogenies, inferences informed by ancestral habitat reconstruction can yield valuable insights into the origins of biomes, palaeoenvironments and landforms. In this paper, we use dated phylogenies of 12 plant clades from the Cape Floristic Region (CFR) in southern Africa to test hypotheses of Neogene climatic and geomorphic evolution. Our combined dataset for the CFR strengthens and refines previous palaeoenvironmental reconstructions based on a sparse, mostly offshore fossil record. Our reconstructions show remarkable consistency across all 12 clades with regard to both the types of environments identified as ancestral, and the timing of shifts to alternative conditions. They reveal that Early Miocene land surfaces of the CFR were wetter than at present and were dominated by quartzitic substrata. These conditions continue to characterize the higher-elevation settings of the Cape Fold Belt, where they have fostered the persistence of ancient fynbos lineages. The Middle Miocene (13–17 Ma) saw the development of perennial to weakly-seasonal arid conditions, with the strongly seasonal rainfall regime of the west coast arising ~6.5–8 Ma. Although the Late Miocene may have seen some exposure of the underlying shale substrata, the present-day substrate diversity of the CFR lowlands was shaped by Pliocene-Pleistocene events. Particularly important was renewed erosion, following the post-African II uplift episode, and the reworking of sediments on the coastal platform as a consequence of marine transgressions and tectonic uplift. These changes facilitated adaptive radiations in some, but not all, lineages studied.

This entry was posted on October 22, 2015 by Administrator.